It’s funny, but when I sit down to list my all-time favourite fantasy novels or series, most of them are not what you’d call recent. In fact some of them are just plain old.

What I do know is that my favourite fantasy reads must have amazing characters that make me feel every ounce of heartache; they must have what I call ‘three-dimensional’ world-building so that I can almost believe such places exist; and must almost always have a heart-wrenching love story (preferably with a happy ending).

Seven of my favourites, divided among seven different authors, are:

1. The Lions of Al-Rassan, by Guy Gavriel Kay — A novel exploring themes of how religion can underpin prejudices, alliances and conflict, set in an alternate version of Al-Andulus (Moorish Spain). It also looks at the legend of El Cid and the fall of Granada. Marvellous characters, thought-provoking drama, and a poignant love triangle.

2. The Liveship Traders trilogy, by Robin Hobb — OK, I know I’ve been going on about this trilogy, but I can’t leave it off my top-seven list. It has talking ships, pirates, merchant dynasties, and a unique take on dragons. The characters are wonderfully complex and the setting brilliantly exotic.

3. The Ruins of Ambrai, by Melanie Rawn — The first in a trilogy that was never finished, it nonetheless holds up well as a stand-alone. It’s the story of three sisters of noble birth, separated as children and brought up on two different sides of a mage war. And a minstrel who gets caught up with one of them.

4. Kushiel’s Dart/Chosen/Avatar, by Jacqueline Carey — The first three in Carey’s remarkable series set in an alternate version of Europe are told by Phedre, a courtesan/spy. Another heart-wrenching love story between her and her companion/protector, and lots of court intrigue and adventure. (And quite a lot of bondage…)

5. Mordant’s Need duology, by Stephen Donaldson — An old favourite and I still love it. A depressed woman from our world goes through a mirror into another world, where she is hailed as a saviour. She finds meaning and self-worth and confidence and comes to love an unlikely hero.

6. Second Sons trilogy, by Jennifer Fallon — Something a little more recent (although not that recent!). At heart, the story is about the nature of faith, and how those who follow blindly can be exploited. It’s also about the ‘next generation’ — how the sons and daughters of ‘great’ people carve out their own niche in life and either reap what their parents have sewed, or atone for their sins.

7. The Nightrunner series (first three) by Lynn Flewelling — Rollicking adventure with cat burglary, spying, fighting and magic. Lighter in weight than most of the others above, these three are nonetheless a lot of fun. They make my top-seven by virtue of the number of times I’ve re-read them.

Next time I’ll share my top-seven more recent reads that probably haven’t had time to sink in yet.

The reason for all this sharing is to fulfill my obligations for accepting another couple of blog recognition badges that were thrown my way recently. And so I must also stop for a moment to thank those who bestowed them upon me and pass on the love. 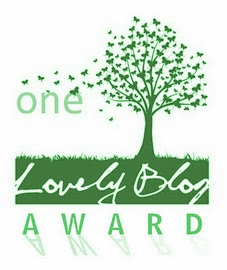 The first is the One Lovely Blog award, presented to me first by the wonderful Elaine Smothers and then by the fabulous Judythe Morgan. The second is the Very Inspiring Blogger award, courtesy of the marvellous Janice Heck. 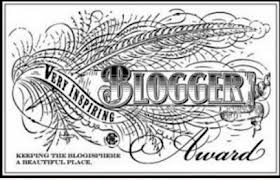 Thanks ever so much, ladies! All three are part of the wana community, writers who have come to understand ‘we are not alone’.

The rules associated with both these badges are the same: thank the person who nominated you and link to their blogs (as above), share seven facts about yourself (hence my list of favourite fantasy reads), pass the badge onto another 15 blogs.

What I’ve noticed with these is that many people don’t seem to get around to playing the game. (I like playing because I feel as though I’m now collecting blog badges in my sidebar!) So I’m going to share 15 blogs with you all, irrespective of whether I think their authors are going to play or not, and maybe, just maybe, I’ll be sending some visitors their way.

Going back to my seven somewhat ancient fantasy favourites for a moment — Is anyone reading this on the same page as me? I’d love to hear whether anyone else still has these on their shelf… and whether they get any of them out again from time to time.

If not — what makes it to your all-time favourite list?