A few days ago I was talking about writing with joy — but now it seems blogging with joy can be good too.

I was thrilled a couple of days ago to be tagged by The Hyperteller for the ‘Tell me about yourself’ award. Perhaps I’m a little more excited than is warranted, but it’s so nice to have people read, comment, and now acknowledge my blog. Since I diversified content at the start of this year, I’ve been trying to figure out which types of posts are of most interest to readers, but to be honest it’s quite hard to tell!

Anyway, thanks Hyperteller for the vote of confidence.

And now I’m supposed to share seven things about me. Before I start (and right now I have no idea what I’m going to write) I’ll let you know I already came up with seven things in January, when the Versatile Blogger recognition was bestowed upon me. (Actually, Mike Schulenberg nominated me again about six weeks ago, and I never thanked him — oops. Thanks, Mike!) So if you’re really interested, and would in fact like to know 14 things about me in total, you could check out this post as well.

1. I think Farscape is just about the best TV series ever. Who ever would’ve thought a science fiction series with muppets would work? But it did and it was awesome. The ensemble of disparate (and desperate) characters, each with their own agenda, coupled with the sheer creative brilliance and humour of the writers, made for a wonderful series that tackled deep issues but didn’t take itself too seriously. I recently re-watched all four seasons, and felt tempted to go straight back to the beginning again. If you haven’t already, check it out! 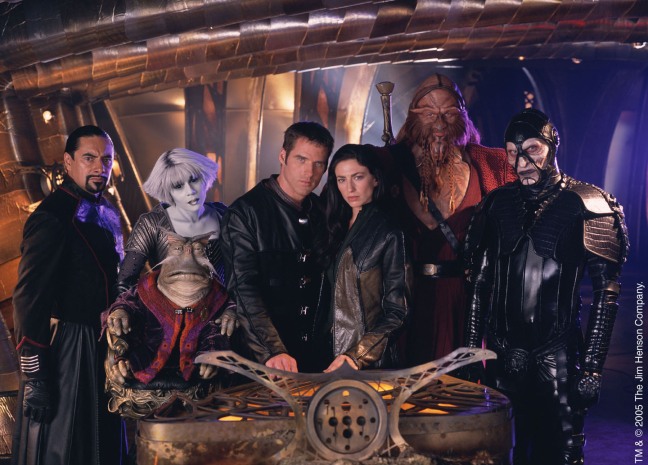 2. My favourite scene in the iconic BBC production of Pride and Prejudice (the one with Colin Firth and Jennifer Ehle) isn’t that scene, but the one that comes after it. Most women will know what I mean by that scene, but for the uninitiated, it’s the one where Mr Darcy strips off his outer garments and dives into the lake. Anyway, while this is truly a piece of art, I absolutely love the following scene, when Elizabeth is strolling through the grounds of Pemberleigh and comes across Darcy returning to the house (somewhat deshabille). Her embarrassment and mortification at being sprung checking out his magnificent abode, so soon after rejecting his suit, are so exactly how I imagine that scene in the book. Brilliance.

3. My boots are my current favourite item of ‘clothing’. I honestly don’t know why it’s taken so many years to buy a pair of long black boots; but now I have them I’m totally hooked. I’ve changed my entire mode of dressing to accommodate them. Once you wouldn’t have seen me dead in a dress; now I put one on every other day. This has of course necessitated more shopping to acquire said dresses. And leggings. And skinny jeans to wear under the boots. I’m obsessed, I tell you!

4. I have a decided fondness for cake. This may not come as a total surprise, given my post about a vanilla slices a while back, but you may not appreciate the extent of the devotion with which I worship at the temple of cake. Favourites include tira misu, baked cheesecake, chocolate mud cake (and any variation that involves caramel or mars bars or toblerone…), citrus tart, anything involving custard, anything involving almond (I’ve just devoured two WeightWatchers cherry Bakewell tarts), flourless orange cake… Show me an old-fashioned English high tea and I’m there — the most famous I’ve sampled are those at the Pump House in Bath, England… and at the Raffles Hotel in Singapore. Check out this photo of the Hopetoun Tearooms in Melbourne (vanilla slices bottom right):

6. Part of me would love to live in a cute English cottage with a thatched roof, uneven timber floors, and low ceilings. This cottage would have brilliant insulation, an open fire, and state-of-the art electrical wiring to accommodate my broadband internet, home entertainment system and computer setup. Said cottage would be located in a quaint village — or it could be positioned on the edge of a cliff or halfway up a secluded mountainside. And that would be my writing cave.

7. My favourite travel destinations are those where I can soak up history and culture. It’s possible my all-time highlight is still Delphi in Greece, which was one of the first overseas places I ever visited almost 20 years ago. It’s such a magical site, with its Temple of Apollo and ancient theatre, and that magnificent view down the valley. No matter where I go in the world, I gravitate towards the ancient monuments, the old castles and forts, the traditional marketplaces. A walking tour is always first on the agenda. I like to do things when I travel. I’m not one for a beach holiday. Here’s a photo I took on my last trip. It’s the magnificent Roman Aqueduct in Segovia, Spain. 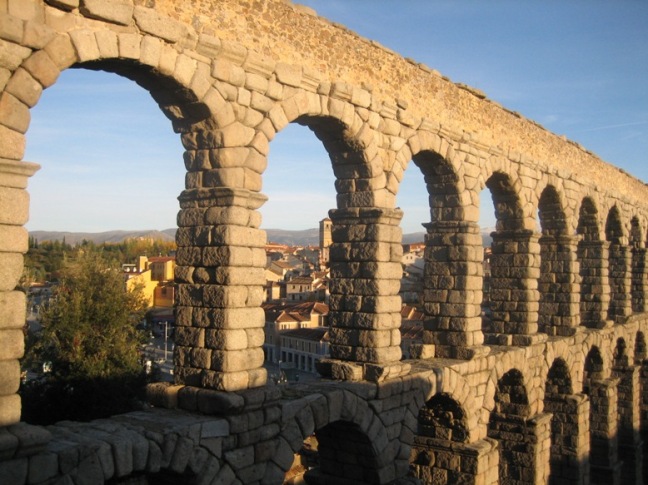 And now for the part where I tag seven other friendly bloggers for the next round. This bit is really hard, because when I count them up, I’m reading and enjoying way more than seven blogs… Arrrgh! But I do have to leave some for others to tag, I guess… Without further ado, here are the seven. I’ll leave it to them whether they want to play or not, but check out their blogs!

That’s it from me, for now! Let me know what you think.

15 thoughts on “And now for some blog joy”