We have made it to the island of Mycross — but we have no weapons. This is not a good thing.

I do have my dagger and necklace of exploding beads around my neck. And my bracers. But we are forced to trust an unknown organisation that our weapons will be returned to us… at some point. We are very nervous, Ammonite especially.

The piratical Divos Halfleg gave us passage to the island, paid for apparently by the mage Abhorran, who we have come to meet. Apparently weapons are not permitted on Mycross, which is under Aramayan martial rule, and so we trustingly gave over our weapons to be smuggled ashore in the false bottoms of two crates.

Problematically, no-one explained to us how or when they would be returned to us, and this morning we almost got ourselves killed trying to regain them.

The mage Abhorran is a crafty one. On the surface he has dealt with us fairly. He paid us what he promised for the Eye of Arik in gold and gems, returned our weapons to us (thank you blessed Emrys!), and has been generally amiable and hospitable.

But he is insistently interested in the Eyes of Varrien and knew we had retrieved one of them. He also tantalised us with hints of information about the flail… we foolishly fell for it and lost some of the gold he’d just paid us for information we basically already had. Gah!

(Why do people always want money for information? We need to get smarter.)

Interestingly, Abhorran seemed displeased we had bestowed the left Eye of Varrien on the Church of Elloran. I don’t know what to make of that. Should we be worried? (Is it our concern?)

Somewhat terrifyingly, he also revealed that OUR names are now being bandied everywhere in connection with the left Eye of Varrien! We have lawbringers on our trail apparently. Tracking us after events in Hyden’s Ford when Calwyn and Ammonite managed to kill some of their number.

Abhorran has also offered us another job. Of course we are going to take it, because we cannot seem to resist such things. But it will probably kill us.

He wants us to travel a day or so from here into some mountains, where we will find an abandoned Vahdrim mage experimentation and testing ground. He wants us to bring back scrolls. Apparently they were experimenting with animal hybrids and plant control. Weather control too.

Basically, there is likely to be a lot of lingering magic. Powerful magic. Unexpected effects, he says. Be cautious, he says. Right.

Why the devil would we want to go there?

About the only thing going for it is the fact it’s in a forest.

The forest is beautiful. Massive trees. Ancient. It’s in the crater of an old volcano. A surprisingly large crater, ringed by impenetrable rock walls of mountain.

Not so impenetrable obviously. But scrambling and battling through the rugged tunnels within the rim has taken its toll on us, and we have decided to regather our strength before entering the forest. No matter how serene and wondrous it looks, we know it will be treacherous.

And so we wait.

We’re in a large hewn mountain chamber the Vahdrim must have used as their main base of recreation and operations. It’s a safe haven, untouched by the critters that have taken over the rest of the tunnels, thanks to Vahdrim magic. We have beds and water. It’s a good spot in which to wait.

It took us over a day to reach the external rim of the crater. We spent last night in the forest on the flanks of the mountain. Ammonite was attacked by a spider this morning. It dropped out of the trees with no warning — no doubt a taste of things to come.

We were saved from stumbling blindly in the forest by the appearance of a ranger Abhorran had said would help us find the cave entrance we needed. Funny how he didn’t mention said ranger would demand coin for doing so. (We should have negotiated expenses. And recompense for items damaged. Next time, I will mention that.)

So… the caves. The fun we had this morning.

Yeah, caves are not really my thing.

They were mostly a series of natural fissures and crevices the Vahdrim must have utilised to access the chamber we’re in now. Lots of twists and turns, dead-ends. And critters.

First up we were attacked by four giant beetles. We dealt with them easily enough, and their corpses proved quite useful in drawing the attack of the next critter we found — a brown mould slime thing. (Thankfully Brynn spotted it before it dropped on him!) 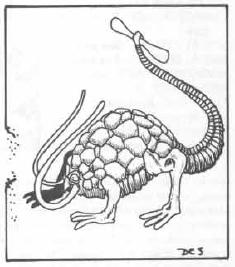 Then there were the three rust monsters. Ash (good dog that he is) growled when he detected them and identified which of numerous holes they were secreted in. But we hadn’t ever encountered rust monsters before and, alas, poor Ammonite came out second best. (Remember that remark earlier about damages?)

I had the advantage of watching a section of Ammonite’s splint mail (magic splint mail!) and their longsword rust in seconds.

Immediately I remembered the wooden ranger’s club and sheathed my longsword. (Oh, thank blessed Emrys my brain was working.) That club proved very effective against the rust monsters. Nor did I have any steel armour for the rust monsters to consume. They didn’t attack me once.

The next rust monsters are all mine. There’s one of those three left anyway. It scuttled back into its hole after we killed its friends.

But poor Ammonite* lost their armour and two swords. Horrendous.

Our final challenge today was getting into this chamber. Being a Vahdrim stronghold it was spell-protected, and required us to solve a puzzle to deactivate it. That is, it required Calwyn to solve a puzzle, since he was the only one who could enter.

In the end Brynn risked injury to force his way in and managed to assist Cal, who is usually the smartest of all of us. They solved the puzzle and we’re all now ensconced in this sanctuary. There’s a door in the cliff face, leading outside into the crater and the forest, where magic and no doubt mayhem await us.

But that is for tomorrow.

*Ammonite is an itinerant warrior of indeterminate gender, who makes jewellery in their spare time. Ammonite is slightly less attractive than yesterday.

2 thoughts on “D&D Chronicles: The island, the mage and the volcano”