Here’s my wrap up of books read in November…

One for the money – Janet Evanovich

This is the mega best-selling first novel in Janet Evanovich’s widely acclaimed Stephanie Plum crime series, which is now up to book #21 or something… I’ve been intrigued to read it for a while, and was thrilled when one of my reading group friends selected it for us to read this year.

I enjoyed it some. It’s a fast-paced and snappy read about a young woman who loses her job and becomes a bounty hunter. She’s woefully under qualified, inept, headstrong, impulsive, dogged and (in my opinion) stupid. And since I’m not a huge fan of stupid protagonists, this did slightly mar my enjoyment.

Counterpoint and Crescendo – Rachel Haimowitz (Song of the Fallen) 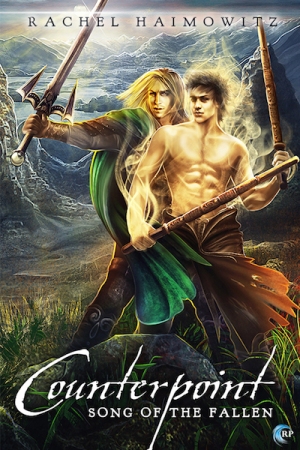 I came across this high-fantasy duet by accident, initially attracted by the covers and then curiosity and positive reviews. The series is set in a secondary world in which humans and elves have been mortal enemies for 300 years.

In Counterpoint, Ayden (a ranger elf) becomes the prisoner of Prince Freyrik (human), who is struggling to protect his people from assault by rabid and magically altered animals (ferals or darkers). The book is a love story at heart, with the two men having to overcome a bunch of stuff… I confess I wasn’t too comfortable with the whole ‘Stockholm syndrome’ thing happening here — although by protecting and favouring Ayden, Freyrik jeopardises his own position with his king and does have to make difficult decisions. But while Freyrik’s choices are moral, poor Ayden undergoes a great deal more, both physical and psychological. Having said that, the author does do a fairly good job of establishing an almost equal relationship by the end of the book, and I felt it worked.

The two main characters are well drawn and the fantasy world feels solid — although it’s all fairly familiar and doesn’t span far beyond forest, castle and villages. It’s a character piece primarily, featuring an overall story arc about fighting off the ferals, in which Ayden plays a key role. It’s a good read, but rather long… although it probably needs to be long for the gradual growth of the relationship. Anyhow, it ends with a cliffhanger, so one does need to move on to book #2.

Crescendo is a very different book and, while still character driven, has a lot more plot. Freyrik is hauled to the capital city for an unofficial disciplining for his lenient treatment of Ayden, and Ayden has his magic silenced. The two spend a lot of time apart (despite the fact they share quarters) — neither has much control over his respective situation. Freyrik finds himself embroiled in political machinations and more moral dilemmas and bad choices. Ayden has to deal with his own plight and that of all the other enslaved elves. Their love and trust in each other is what keeps them going… Again, Ayden in captivity suffers a great deal at the hands of merciless humans, which makes the book somewhat harrowing (yeah, I’m pathetic like that). But by the end, they’ve figured out what is causing the ferals to keep attacking humanity and all ends well.

As a pair of fantasy novels they work rather well.

This is a series of six urban paranormal fantasy novellas about Caleb (barista, artist, vegetarian and TK) who manages to get himself possessed by a Drakul (who takes the name of Gray), an entity who devours the etheric energy of demons. And John, an agent and exorcist with a paranormal-FBI-like group called SPECTR.

The first novella (Hunter of Demons) sets everything up. Caleb needs John to exorcise Gray, but the Drakul is too strong; moreover, they only have so many days (I forget how many) to figure out how to do it before the possession becomes permanent. Meanwhile though, Gray doesn’t seem to be a threat to humans, so he and Caleb reach an accord, with Gray manifesting when required to slay ghouls and other demons. He also imparts greater strength and psychic abilities to Caleb as the two cohabit the one body. They can converse with each other, although Gray isn’t much of a conversationalist. It’s pretty cool.

And then there’s John, who falls in love with Caleb and ultimately Gray as well. And vice versa. It’s an interesting love triangle, and I expected Caleb to feel jealous of Gray, but he says at one point that he could never be jealous of someone who loves him so unconditionally.

The novellas progress through several episodes of demon infestations in need of solving, and then arc into conspiracy, espionage and revolution. The ultimate climax is grand in scale indeed, and the outcome doesn’t feel like a foregone conclusion — which in this type of series, heavily founded on the love story, is something of a feat.

I’m growing rather fond of the novella length, which I can read in a single evening, especially when I can line them up one after the other. Having said that, numbers 4-6 in this series do not really resolve individually and are more like parts of the same story; so I’m glad I wasn’t waiting for them to be published. You can purchase them in e-book omnibus (SPECTR 2), which I would recommend doing.

I do rather like the paranormal urban fantasy world Hawk has set up. Basically the demon spirits possess humans and make them do bad stuff — but if the SPECTR exorcists catch them in time, the humans can be saved. It’s a pretty simple concept, but works really well.

This is the sequel to Fair Game (All’s Fair), which I read in September. Set in the Seattle area, Fair Play is about Elliot (former FBI agent, now college history professor) trying to solve the mystery of his father’s activist past (and voluntary disappearance) after someone burns down his father’s house. There’s a Cold Case involved. There is also a lover in the form of current FBI agent, Tucker, who alternately tries to persuade Elliot to stop investigating OR assists by providing resources, intel and backup. It’s a pretty good little family and political mystery, really.

And that’s it for another month. Finished listening to Persuasion (Jane Austen) in the car, a lovely driving experience. I’m now listening to The Forgotten Garden, by Kate Morton.

I’m not going to continue these monthly reading posts next year. They’re getting a bit long. I honestly did not expect to read so much. Instead I will try to write short, regular posts as I finish each book… One more month to go!

9 thoughts on “What I read in November”