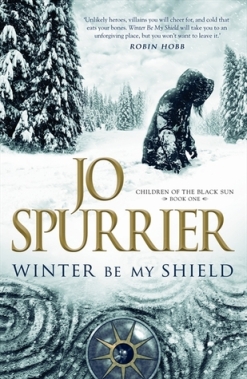 It’s been good to finally get my teeth into some contemporary epic fantasy in the form of Australian author Jo Spurrier’s Winter be my shield (Children of the Black Sun – Book 1).

From the very start this novel gripped me in its icy vices and – even if perhaps it faded a little in the second half – kept me reading into the early hours of the morning.

Sierra is a young ‘sympath’ mage who has just escaped two years of enslavement and servitude to a sadistic blood-mage. She’s now on the run from the blood-mage’s apprentice, Rasten, assigned to retrieve her. Floundering in the freezing, snow-bound wilds, she encounters the exiled prince Cammarian, who has recently rescued his foster brother Isidro from the same clutches. Having been brutally tortured by Rasten, Isidro is crippled and ill, and Sierra’s arrival sets off a chain of events that sees them all struggling to stay alive in the face of pursuit from Rasten, raids by invading slavers from another country, and politicking between the local clan leaders and the foreign king.

Overlaid on all this is Sierra’s struggle to control her growing power in a land where magecraft has been outlawed… But others are seeking its lost secrets.

The tensions pulling between (and within) the main characters provide much of the conflict. Sierra’s rare power is derived from the pain and suffering of others, making her the object of suspicion and despite among would-be allies. Yet use of her extreme power is also coveted. Isidro’s crippling injuries make him a liability to his companions as they move around in the snowy landscape. Yet Cam is committed to keeping him safe at all cost. Rasten, despised and feared by both Sierra and Isidro, nonetheless clearly has his own agenda that sometimes involves coming to their aid…

Rasten is actually a fascinating character. From the start we know he has tortured and crippled Isidro, helped incarcerate and torment Sierra, and we witness him skinning people alive and carving out hearts as part of his blood-ritual to obtain power. He thinks little of rape and murder, seems completely amoral and somewhat mad, yet even so we sense he might be redeemable. He genuinely cares for Sierra to the point of obsession and will do anything to ensure she survives whatever ordeal she brings upon herself (largely because he also needs her power to secure his freedom). I am intrigued to see how his character develops in the second book.

A stand-out feature of Winter be my shield is the way the wintry environment pervades everything.

The reader is never allowed to forget that it’s freezing and wet and even dark at times. By constantly using small amounts of detail, the environment is reinforced again and again — but the point is never laboured. A strong setting is a really important aspect of fantasy for me, and Spurrier does setting in this book really really well. From the spruce floors of the deerhide tents, to the heavy woollen jackets, to lamps and light stones, camp stoves, tent ties, snow shoes…

Isidro’s incessant pain is really well conveyed too. Spurrier never lets up on poor Isidro as his shattered arm is knocked or jolted, and his physical weakness, fatigue and one-handed limitations are exposed time and again. The foundations are laid so well early on that even when his injuries etc are not mentioned, they’re instilled in the mind of the reader. We intuitively understand why he’s a liability to his friends and feel for him desperately.

As far as the story goes, there are a couple of major changes in direction that give it an awkward structure in my view. Somewhere in the middle of the book, one set of characters departs stage right around the time two additional and separate groups arrive stage left. And then it ends on a something of a cliffhanger… (Cue Book 2: Black sun light my way.)

I liked the first half of the book best — when Sierra, Cam and Isidro (with a few others) are desperate and on the run. It is tough and intimate and cold and painful. The second half of the book, when their journeys diverge, seemed a little disjointed and disconnected. The throbbing urgency drops off and I also think Cam’s identity as an exiled prince gets a bit lost.

I have a few other minor quibbles as well — the choice of point of view is a little all over the place, the time elapsed seemed inconsistent at times, and I felt the depth of characterisation dropped off with the influx off all the new characters in the second half. On top of this, there is a LOT of torture and threat of rape (of both men and women), which I felt became overdone. It’s also interesting that one of the main looming threats, the blood-mage Kell, doesn’t even appear in this novel, which undermines his effectiveness.

However, these quibbles are mainly personal irritations which maybe wouldn’t bother most readers. I’ve read a few reviews that complained about the slow pace of the first half, so it just goes to show that different readers appreciate different things.

The writing itself is otherwise solid and the story keeps moving. It’s worth noting though that although romantic relationships develop between the various characters, they happen quite incidentally. Although these relationships are key to the plot, they are not really subplots in themselves.

Anyway, even if the second half of Winter be my shield didn’t quite live up to the first half, I still enjoyed it immensely and finished it in less than a week. I reckon I’d give it 4 stars. Now I’m reading the sequel and enjoying that too. More on that later!

If you’ve read Winter be my shield, what did you think of it? If not, are you a little bit tempted?

10 thoughts on “Book Review: Winter be my shield”