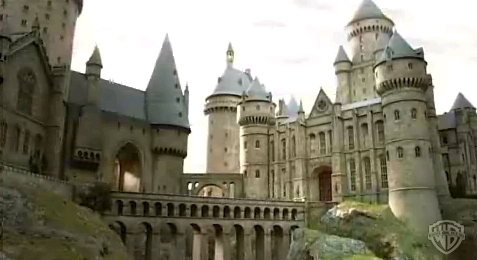 Last year, I gave my nine year old niece the first Harry Potter book for her birthday. She wasn’t much of a bookworm… in fact, she preferred books on science or the natural world. Nonetheless, I decided to impose my love of Harry Potter on her and crossed my fingers that she would like it.

To my great delight, she loved it. She devoured Harry Potter and the Philosopher’s Stone and then immediately read it again. Following that, books 2 and 3 were borrowed and consumed. She hasn’t been permitted to read book 4 yet, but that’s only caused her to turn to the myriad other fantasy and adventure novels available for middle-grade readers. Almost overnight she turned into a bookworm.

Kudos to me, I think!

Last weekend, she and I sat down to a Harry Potter movie marathon of the first three movies. (She’s only allowed to watch each movie once she’s read the corresponding book — and to her credit she agrees with her mother’s ruling on this, because, having seen the first movie already, she’s already aware that the books are vastly superior and give her much more scope for the imagination.)

It was wonderful to sit with her and watch the films (which I’ve seen many times) with her for the first time — to experience her wonder, and calm her disquiet when she couldn’t quite remember what happened, and answer questions such as: “But what if Hogwarts really does exist? After all, we’re muggles, so how do we know it doesn’t?”

How easy it is to forget what it was like to be not-quite-ten with a keen imagination and love of far-away places… when we wanted so desperately for something to be real, we could almost persuade ourselves it was.

I’ve decided we’re going to have a Harry Potter Reading Club within the family, so all we adults have an excuse to re-read the books one at a time and discuss them together over afternoon tea…

In return for being a Harry Potter kindred spirit, I’ve also been inducted into the world of Pottermore — JK Rowling’s interactive web site for Harry fans. Here, one re-lives each book, chapter by chapter, collecting objects for one’s trunk, and attending Hogwarts as a student.

We get a shopping list in Diagon Alley, and with our budget of 500 galleons go shopping for all the school things we might need — including choosing a pet (I’ve got a black devilcat – heh) and being matched to a wand (sycamore with dragon heart string) — and then it’s off to Hogwarts to be sorted into a House (Gryffindor – huzzah!).

At the moment, I’m stuck in my first potions class, trying to figure out how to successfully make a potion within the time limit. It’s actually quite hard! You can earn house points and have ‘friends’ and leave messages on message boards etc — it’s kind of like facebook at Hogwarts. My user name is HazelDragon19664 — come play with me!

No wonder kids could almost be persuaded to believe Hogwarts might actually be real!

Have you ever wanted something so badly you’ve almost convinced yourself it’s happened? If Hogwarts really did exist, would you want to attend as a student? (I reckon I’d go back to high school just for the fun of it!)

31 thoughts on “But what if Hogwarts really does exist?”