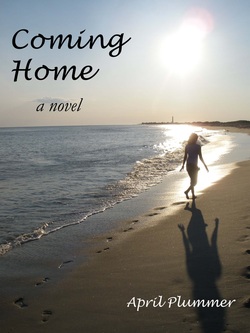 For today’s FRIDAY WITH FRIENDS I welcome April Plummer, who has recently published her debut novel, Coming Home. I haven’t had the chance to read it yet, but it sounds incredibly moving. I asked April to stick around to tell us about her novel and share some of her experiences during its creation.

After the latest boyfriend rapes her at knife point, Isabela throws her few possessions into her car and drives until she reaches Lakeside, Montana, twenty-five hundred miles from New York City’s suffocating smog.

As her bodily scars fade, she takes solace in the nature around her and records it in her sketch pad. It isn’t until she begins sketching scenes from her rape that she learns to cope with what happened.

But leaving her mother behind to fend for herself might have been a mistake; and when two strangers appear on her doorstep claiming to be her dead grandparents, they threaten the fragile childhood memories.  Before she can rebuild her life, Isabela must decide to either let her past go or unite it with the woman she’s become.

What can readers expect from Coming Home?

I think readers can expected an unexpected journey. Sure, we’ve heard all about it before a million times — a young woman is raped and runs away to start a new life. But this story is about so much more. Isabela must discover her own freedom and learn to trust others as well as herself, but she also must face a past she didn’t even know she had.

What was the kernel of an idea for this book?

I love that — “kernel.” That’s exactly how all my novel ideas begin. This one started with the rape. It’s a little personal for me, and I needed an outlet. I needed a way to deal with my own emotions and the complexities raised in my own life. That’s all I knew about Isabela when I began to write — that she had been raped. She told the rest of the story for me. Took it right out of my hands and splashed it onto the screen.

What have you learnt from writing it?

Wow, I have learned so much. I think the biggest thing is that you can’t force a story. The first draft of Coming Home was totally different. I tried to turn Isabela into something she wasn’t. I had this idea that she was a dancer, just as I was. I wanted her, I guess, to carry on my childhood dream of becoming a ballerina, while also fighting her inner demons. But it didn’t work. That isn’t who she is. I backspaced my way to the beginning, started again, and let her take control. It worked.

Why have you decided to self-publish?

My husband suggested it several years ago, and I think, honestly, at first I was just lazy. It was so much easier to sit back and wait for an agent. But the thing is, you can’t just sit back and wait. You still have to be active in your pursuit of the perfect agent. And I wasn’t doing that. I realized as I researched a bit more that doing it all myself is exactly what I needed. Money is not important. Sure, I want to make money from my writing, from something I love. But more than anything, I want others to enjoy my stories. I want people to read my stories and become the characters. I want to hear, “April, I couldn’t put it down.”

What has been the most challenging aspect of self-publishing?

Balancing my time, without a doubt. When you do it yourself, you do it ALL yourself — marketing, promoting, the cover art, editing, writing, more and more and more editing, formatting, social networking…then you remember that you’re also a full time employee, a wife, and a mother. You have friends and family all demanding your attention. And, oh yeah, you love to read, and you have a few favorite TV shows. And laundry to fold and dishes to wash and floors to Swiffer…it’s never-ending, and I’ve had a few meltdowns. It helps to have a supportive husband, supportive friends, and a terrific group of supportive writers who know just how I feel (like you, Ellen!).

What are your thoughts about the publishing industry at present?

I personally feel that publishing has entered a whole new, wonderful world. I know self-publishers still get a lot of criticism, and I won’t lie. I’ve downloaded quite a few books that…aren’t so great. Because it’s true. ANYone can publish now. But I’ve also come across a lot of jewels from authors that may never have been able to find an agent. Not for lack of talent but for lack of time or just plain luck.

I think ebooks have broadened the horizons for many readers. I know that I have read books I never would have read because of the easy access and the cheaper cost of buying an ebook. I think it’s causing more and more people to read than ever before. Which is always a good thing.

Where to from here for April Plummer?

For some reason, that question makes me smile. I currently have 2 more completed manuscripts — a crime novel and another women’s fiction. I intend to have the crime novel ready for publication this summer sometime, followed by the women’s fiction early next year. I’m not rushing myself because I do have another life, and my family comes first. Sometimes I forget that, but my husband gently reminds me.

Meanwhile, I have a few more ideas tossing and turning inside my head. 🙂 I’ll keep writing, and I plan to keep publishing. If I snag the attention of an agent along the way, even better!
[ed. Well, they do say the self-published novel is the new query!]

How can readers obtain Coming Home?

Currently, it’s available for kindle on Amazon here. Soon, it’ll be available in paperback there as well, but for now, you can purchase a paperback here.

Thanks for visiting, April! I wish you lots of happy readers.