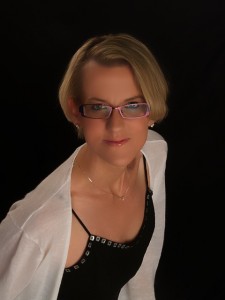 Today I’m absolutely stoked to have best-selling author Julie Kenner (who also publishes as J.K. Beck) as my ‘Friday friend’. Julie is perhaps best known for her Demon-Hunting Soccer Mom series, the first of which, Carpe Demon, is currently being made into a movie. (See below for her full bio.)

What’s your most recent published work, and what are you currently working on?

Thanks for having me here today!

Let’s see…most recently, I’ve had two short releases. One was a fun romantic novella in Holiday Hideout with Jill Shalvis and Vicki Lewis Thompson. As you can guess, it was holiday themed – I did New Year’s Eve. It was a “cabin romance” between two people who’d been madly in love in college, separated by life, and who made a promise to reunite five years later. It was a lot of fun to write!

I also have an e-original out. Shadow Keepers: Midnight is a  novella (though it’s listed on Amazon and B&N as a short story—I don’t know why!) in my J.K. Beck Shadow Keepers series. I was really excited about that one because I wanted to write a story to not only fill the gap between books 3 and 4, but also because I thought that the backstory for the two characters – Caris and Tiberius – deserved to have its own story.

It’s the first historical I’ve done, and I really enjoyed writing it. The characters are both strong and I loved putting in a tinge of Romeo and Juliet. I hope readers of the series don’t miss it, as I think it really adds a lot to Caris and Tiberius’s backstory (they’re the couple in the 4th book coming soon).

So they’re making your best-selling novel Carpe Demon into a movie… (how exciting!). How will you feel if they tear out the guts of your plot and make up their own story with your premise and characters (as they do with so many books made into movies these days)? What do you think of this practice? Do you have any input to the script?

Honestly, I’m certain that things will change in the translation to the screen, but I’ve been nothing but impressed with the folks at 1492, who genuinely love Kate. They’ve recently hired director Andre Overdal to work on the script, too, and I was fortunate enough to chat with him a bit recently, and I know that he’s a fan of Kate as well. So I feel that overall her story is in good hands.  The truth is, though, that my books are my books and the movie is a different animal. I feel blessed that Kate has a shot at getting on the big screen (and that means I have a shot at buying that ever-important dress for the premier), but I don’t expect a page for page translation. I’m just excited to see how it does play out!

Do I have input? No, not really. My undergrad degree is in film, and I do write screenplays (I have one that I wrote with a partner knocking around Hollywood right now), but back when Demon was originally optioned, it didn’t even occur to me to ask. I was a relatively new mom, still working full time as a lawyer and writing about three books a year. Now, I’m glad it’s not on my plate. It keeps my head in the world of the books, and I can go watch the story on the big screen and munch my popcorn (in my fabulous dress!). Will they show me the script once the new version is done? I imagine so, and I’m sure I’ll give notes (it’s the lawyer in my; I can’t read something without a red pencil) but I’m not the filmmaker, so they can ignore me if they want!

Do you know who’s playing your main character, Kate Connor? Who would you like to play her?

I know who used to be attached, but since she’s no longer, I don’t feel comfortable shouting it out there. I was thinking about who could play Kate recently, though (I don’t usually “cast” my books, but when there’s a movie possibility it’s hard not to). I actually really like Jennifer Aniston or Jennifer Garner. They both have the ability to do the physical part of the role, while still seeming down to earth. As for Allie, Kate’s teenage daughter, if Miranda Cosgrove (iCarly) could still play a 14 year old, I think she’d be awesome.

You’re currently juggling two identities: How are you finding that? Is there much crossover of fans?

There is a lot of crossover, which is great. What I’m always fascinated by are the folks who have no idea I’ve got the other identity. Since it’s such an integral part of my life now, I just assume everyone knows!

It’s getting easier. I’ve recently consolidated my websites so as to have a Julie Kenner/J.K. Beck site, and I’ve moved my J.K. Beck Facebook page under my Julie Kenner profile. The end result of that is that I can post J.K. Beck stuff from my phone. Before, it was a different log in, and the poor JK Facebook profile wasn’t getting attention. Of course, folks still need to migrate over to the page… (folks! If you’re reading, migrate! Migrate!). And if anyone wants to Like either Julie Kenner’s or J.K. Beck’s pages, the links are in the sidebar of my website, http://www.juliekenner.com (ok, commercial is now over!)

What’s the best feedback you’ve had from a reader/fan? Which of your personas gets more fan mail?

Julie Kenner gets more fan mail, but she’s had over 30 books, and of J.K.’s, only 3.25 have hit the shelves (3 novels, one novella). The best story? I received several emails after 9/11 from people personally impacted by the tragedy who said how much they appreciated being able to lose themselves in a story. That was really powerful. I also wrote an essay in Everything I Need To Know I Learned From Judy Blume about a relatively rare autoimmune disorder that I dealt with as a teen and young adult, and I received a very sweet letter from a young woman who was thanking me for writing about it, and about how she appreciated not feeling alone with her diagnosis.  That also really struck a chord with me.

What has been your biggest break as an author?

Other than that all important first sale, I’d have to say the movie option. As a result of that deal, I was able to move up my timeline and quit my day job and write full time.

What’s your number one tip for writers still working towards publication?

WRITE. Don’t keep editing the same chapter over and over again. Experiment. Write more stuff. Finish a book. Put it away and start another one. And then write some more.

Praised by Publishers Weekly as an author with a “flair for dialogue and eccentric characterizations,” bestselling author Julie Kenner’s books have hit lists as varied as USA Today, Waldenbooks, Barnes & Noble, and Locus Magazine. Julie is also a two-time RITA finalist, the winner of Romantic Times’ Reviewer’s Choice Award for Best Contemporary Paranormal of 2001, the winner of the Reviewers International Organization’s award for best romantic suspense of 2004 and best paranormal of 2005, and the winner of the National Readers’ Choice Award for best mainstream book of 2005. She writes a range of stories including sexy and quirky romances, young adult novels, chick lit suspense and paranormal mommy lit.

Thanks so much, Julie, for visiting today!

What do you all think about books being made into movies? I’ve seen some terrible adaptations recently. But there are some good ones. Where do you think film-makers should draw the line?