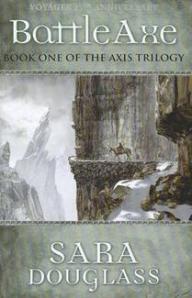 It’s very difficult to put into words how I felt yesterday upon hearing about the death of Sara Douglass, a true pioneer of Australian fantasy. Even today, having had time to reflect and read some of the tributes, I feel intensely and confusedly emotional.

I did not personally know Sara Douglass. I never even had occasion to meet her. But her impact on the Australian SFF industry, fantasy in particular, has been phenomenal and I owe her a huge debt of gratitude as both a reader and a writer. Without Sara Douglass, whose debut fantasy trilogy proved such a huge best-seller, the Australian SFF industry might never have existed in the scale it does today.

When I first read Sara’s Axis trilogy (published 1995-1996), I couldn’t put it down. It had so many things I love about fantasy: heroic characters, strong women, powerful romance, unique characters (I think my favourite still has to be Stardrifter), big epic story arcs, innovative races (such as the winged Icarii). These were books (Battleaxe, Enchanter, Starman) that kept me reading into the early hours of the morning. They were followed by the stand-alone novel Threshold, and then the Wayfarer Redemption trilogy, a sequel to the Axis trilogy — all of which I devoured.

She wrote loads of books after this, but such was her success in establishing our industry that other authors jumped on the bandwagon, thereby providing so much choice that I have never quite gotten around to reading them…

But, based on those I have read, one of the things that has always stood out for me about her storytelling is her ability to get you to empathise with her point-of-view characters. She was a master at transitioning your perceptions of her characters, such that a perceived ‘villain’ might actually turn out to be sympathetic and vice versa. I recall being so impressed in particular by her treatment of Dragonstar in her first two trilogies — from baby villain to adult degenerate to heroic saviour. (I’m not sure what she did with him thereafter…) But she also did it with heaps of other characters. Skilful.

I am really sad that she is gone — and way before her time (she was only 54). And I am even more sad that she suffered so terribly (from ovarian cancer). She wrote the most amazing and important blog post last year called The Silence of the Dying that everyone should read — because we will all know someone who is dying at some stage of our lives, and this post exposes our modern inability to deal with death (and the dying).

Her friend and carer, Karen Brooks, has written the most beautiful tribute for the HarperCollins Voyager blog.

Her real name was Sara Warneke and she will be missed — and, most importantly, remembered.