Ever since the movie versions of Lord of the Rings appeared, I’ve been living in hope more epic fantasy novels will roar to life onscreen.

I love the LOTR movies so much, will never be tired of them. They represent everything I most love about the fantasy genre (and value in life) — adventure, discovery, magic, heroism, deep friendships… The fantastical world first envisioned by Tolkien is brilliantly brought to life by Peter Jackson and his team in those movies. I wanted (still want) more!

Next came the HBO TV adaptation of Game of Thrones. I was excited by this at first — a whole multi-book series of big fat fantasy in TV serial format. It had me salivating at the prospect. It didn’t matter that I never really liked the first book much, back when I first tried to read it it 1999. A TV series would prove a far more digestible format and save me from reading them…

As it turned out, no. Despite the fact that half a world of non-fantasy enthusiasts have become obsessed with GoT, this lifelong fantasy enthusiast could NOT get into it. I tried. Desperately, I tried. The production values are incredible — brilliant acting, fabulous screenplay, amazing visualisation and representation of GRRM’s imagined world on the screen. For those alone, I resolved to watch it, even if there weren’t any characters I actually liked…

In the end, I couldn’t go the distance. The violence — sexual, psychological and physical — did me in. Like several people I’ve spoken to, I made it up until the point where Joffrey gets killed (huzzah! oops, spoilers) and then gave it away.

The Hobbit movies came and went. I didn’t hate them — they do have the same amazing artistic production values as LOTR; but the plot is shallow compared with the depth and complexity of LOTR. They cannot compare.

There are so many amazing fantasy stories out there. Books I absolutely adore. How about a super sexy adaptation of Jacqueline Carey’s Kushiel series? Or a vivid imagining of Robin Hobb’s Liveship Traders? Or a poignant depiction of Guy Gavriel Kay’s The Lions of Al-Rassan?

They would all make brilliant television.

It often seems, however, to be Young Adult or children’s books that are adapted into movies… Not counting the current trend for YA science fiction movies, I can think of Eragon (fantasy) that was made into a movie… And of course, Harry Potter.

Much as I do love Harry and friends, can we have more adult fantasy adaptations please? Preferably without the excessive violence of GoT?

This all brings me to the Chronicles of Shannara, which is what prompted me to write this post.

I got Netflix last week. (Yes, a bit slow on the uptake, I admit.) I was exploring all the options (where to start? OMG) when I came across the TV series, Chronicles of Shannara, which had been mentioned by a friend of mine, just the week before.

The Chronicles of Shannara is a recent fantasy TV series based on the “classic” books of Terry Brooks (the first books were published in the 1970s). (Actually, technically it’s not fantasy, being set in a post-apocalyptic earth that has lost all tech, but it feels like fantasy, with elves and magic and stuff.) So I thought I’d check it out.

I almost didn’t make it past the first episode, which was… pedestrian. Visually it’s quite an attractive and interesting representation of our technological world gone to the vines, but the acting was pretty wooden and the screenplay kind of stilted. Not to mention a derivative plot (which is why I never did read these books).

A couple of things stayed my hand from pressing the stop button — and indeed drew me through the entire 10-part series to the end.

Female main characters — not one, but two. Young women who are enterprising, resourceful, determined, competent, fully clothed (mostly — but discreet nudity is shared among the genders). In this TV series, female characters are not an obligatory afterthought, nor limited to a single main character. At the end of the series it’s these two young women who save the world, through trial, friendship and sacrifice. There’s a guy there who helps a bit.

Quest and adventure — Quest-based fantasy may be considered passe these days, but I still love it. I love exploring new worlds — or in this case a post-apocalyptic north-west America that’s now dominated by elves, trolls and gnomes. And I love the dynamic of a group of characters, finding their inner heroism, struggling to fulfill some sort of mission to save the world. 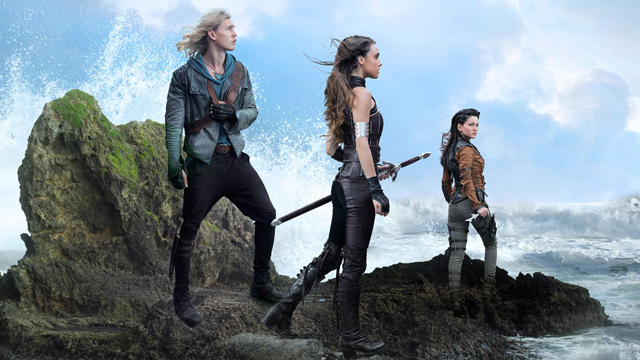 Don’t get me wrong, this show is still B-grade on all levels. It will never compare with GoT or LOTR screen adaptations. But it does have a whole lot of heart and a cast of heroic, likeable characters. I would still rather watch that than GoT any day.

What I really want is a TV adaptation of epic fantasy that combines the slick production of GoT with the heart of Shannara. Please?

10 thoughts on “Shannara isn’t perfect, but gives me hope”