Gosh. How many books have I read this year? (So far 235 books and novellas, of which 198 were new and 37 were re-reads… and still counting.) My inner bookworm continues to devour and my finger continues to madly one-click. In fact, there’s been more one-clicking, because someone introduced me to bookbub.

Bookbub is a website that sends me emails with daily e-book deals in my selected genres (and authors), with direct links to Amazon. There’s many a $1 (or free) book sitting on my kindle, just waiting for me to get around to reading it… I do realise this still adds up in $ terms, but I just tell myself I’m supporting the authors. And if I don’t like a particular book, I don’t have to finish it.

I’m no longer trying to kid myself that I’m reading much of anything other than m/m (or m/m/m). I could probably count the non-m/m books read this year on one hand. (Actually, I did branch out and try some f/f this year, but so far that hasn’t captivated me much.)

But one of the fabulous things about m/m is that it spans all genres — fantasy, science fiction, mystery, crime/thrillers, historical, deep angst-ridden drama… even comedy, although that’s not my thing. So I bounce around from genre to genre, depending on my mood.

This year, there have been some fabulous new releases from favourite authors, and I’ve discovered some new authors as well. Over three posts, I’m going to summarise my favourites month by month, with some wrapping up at the end. This post covers January to April.

The absolute highlight of January — and maybe the year — was Josh Lanyon’s Adrien English series (Fatal shadows, A dangerous thing, The hell you say, Death of a pirate king, The dark tide). I do not have the words to say how amazing, fabulous, wonderful this series is, in terms of the love story arc across five books. Each book is an individual mystery, but it is not until the end of the final book that the relationship between Adrien and Jake resolves — and it’s breathtaking. I was numb the afternoon I finished The dark tide, and poured out my feelings onto the page in a post I never did publish. I was so raw. Nothing I wrote encapsulated what I felt. Even now, 11 months later, my heart still rushes as I remember the ending. Aaaaand, there’s a sixth Adrien & Jake novella due out in mid-January. I will be feverishly re-reading these books and slipping straight into that one. My heart rushes just thinking about it.

January was also the month Cold Fusion by Harper Fox came out. This book has wonderfully complex, flawed characters who transcend themselves by the end, Harper Fox’s beautiful poetic language. And, as always with Harper Fox’s books, the fabulous sense of place — in this case the northern wilds of Scotland. Love it. (See my full review here.)

And I also loved Out of Focus by L.A. Witt. This one is m/m/m and deals with a couple of guys who have been together for a decade, and who like to bring submissives into the bedroom from time to time… and they find an adorable guy they decide to keep. It’s not heavy BDSM, and deals more with the relationship side of things. I’ve come to adore m/m/m books where I can believe in all the sides of the relationship. LAW has started a series where she writes the prequels for couples who feature in her menage stories, and I would love to read how Dante and Angel first got together. 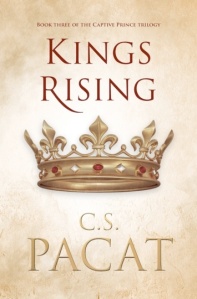 The highlight for February was the much-anticipated Kings Rising by C.S. Pacat, third book in the Captive Prince fantasy trilogy. I was so worried this wouldn’t live up to the anticipation, because I adored the first two in this series — which I re-read prior to launching into the third. Aside from a few wobbles at the start and the end, Kings Rising was awesome and I love love love this fantasy trilogy so much. Like with the Adrien English series, I had a major book hangover once I finished. To quote myself: “Damen and Laurent. Oh. My. Fucking. God.” I reviewed Captive Prince/Prince’s Gambit here and Kings Rising here. 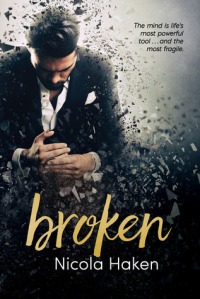 In March, the best book I read was Broken by Nicola Haken. This is an example of deep angst-ridden drama/romance, and deals with triggery themes of self-harm, depression and suicide. It’s incredibly intense and well-written. I felt pretty wrung-out at the end, but the wonderful thing about this genre is that the books usually end with hope and healing and the power of love. I will definitely be reading this one again.

I also read Us by Sarina Bowen and Elle Kennedy, which is the sequel to Him. Him was probably one of my favourite reads last year (new adult, ice hockey players). Us didn’t reach the same heights, but I enjoyed it.

More brilliance in April! This time from K.J. Charles and her Society of Gentlemen series (The ruin of Gabriel Ashleigh (novella), A fashionable indulgence, A seditious affair, A gentleman’s position). These are English historicals, and not the usual kind. There is a whole host of upheaval going on, with a dash of political activism and class conflict and of course the terrors of discovery. Oh my, this series is brilliant. It’s exquisitely researched and crafted from both a plotting and writing perspective. And each book is completely different. A must for fans of historicals. 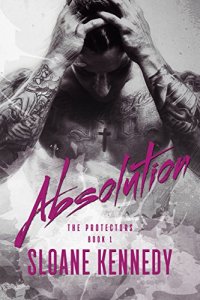 Another of my April favourites was Absolution by Sloane Kennedy. This was my first encounter with this author, who is a veritable machine when it comes to her publishing frequency. I’ve since read most of her books — Absolution is the first in her Protectors series, another of note is her Barretti Security series — but Absolution is probably my favourite. It’s m/m/m and deals with Jonas (an artist with a traumatic past), who is the target of hitman Mace (don’t hate him; there’s a reason), and Cole (an ex-Navy SEAL whose sister Jonas once knew). The fates of all three men intersect around a thriller-style plot, and… aw, they are so sweet together. This one works for me, because Kennedy takes the time to build the three sides of the relationship and I believed in them.

I also enjoyed Imperfect Harmony by Jay Northcote, not least because it’s set around a community choir, which reminded me of my own singing experiences of the past few years. She’s another new author for me this year, and I’ve enjoyed several of her books.

Stay tuned for Part 2: May – August reading highlights between Christmas and New Year. I’m glad I started writing this early!