It’s over a year since my Mongolian adventure, and I haven’t got near all the blog posts I was going to write. Thank goodness I kept a daily journal, or I’d have forgotten so much already.

I always intended to write themed posts about my experiences, rather than simply transcribing my journal. But… I’ve left it too long now, so my journal is what you get. It’s not verbatim, though. I’m cutting out the boring bits and re-interpreting a few things based on later experiences. I’m focusing on my reflections of the Mongolian horses and culture and horses and landscape and… did I mention horses? (Also, in some cases, kittens…)

It’s also giving me an excuse to finally go through my photos. Some I have already used in earlier posts, but I think many will be shown here for the first time.

So here we go!

Arrived Ulaan Baatar late morning and were whisked away to our hotel by a driver. The journey from the airport was fascinating. The architecture is blocky (mostly) and exists in pockets of conformity and multicoloured madness. Everywhere is badly maintained — cracked concrete, abandoned buildings, scraggly weed-infested gardens, faded and jumbled every which way — but quite clean, as in devoid of litter. Today was overcast and dusty and (when the wind picked up) thick with fluffy plant seeds.

We spent a couple of hours this afternoon walking around the city — there’s not much English, and things are hard to find, but the mix of architecture is interesting. The traffic is mad and, like in so many Asian cities, crossing the road is terrifying. I braved one of the non-traffic-lit pedestrian crossings… and survived. 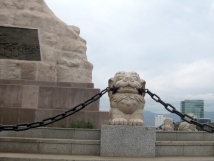 I can’t wait to get out of the city and onto the Steppes. As the plane flew in, the view of the crumpled landscape was amazing. It’s really NOT flat. The drive from the airport also gave us a glimpse of the undulations at the edge of the city. I’m so excited to get out into the wilderness and experience the landscape properly! I think I’ll gain just as much insight about that as horses (to inform my writing) from this trip.

We have internet here in our hotel, but otherwise my phone is in flight mode. For the next two weeks, we won’t have any internet at all. Nor will we be able to charge our camera batteries, so we’re going to have to be conservative. It’s going to be interesting!

It’s after 7pm with such bright sunlight that it feels like the middle of the afternoon. We’ve had a relaxing day at the Steppe Riders camp, after being picked up from our hotel at 10am. The camp consists of several permanent gers, including one central common/dining ger, where we were greeted with traditional Mongolian tea. This is milk with rice and salt and bits of dried meat… one eats it with a spoon… very odd, but edible. Then we had hot tea.

We were left to our own devices for several hours, while they prepared a ger for us to sleep in and awaited the return of another riding party. We loitered in these gorgeous surroundings — rolling treeless hills, dotted with gers in the many valleys. The hilliness of this part of Mongolia has surprised me. The ground is also rocky in parts, and the grass is very short. Kirstyn and I walked up to the top of one of the hills to see the view — more hills and gers, also cows, horses, sheep, and many falcons hovering above the steppes.

Lunch was served at around 3pm (!) when the riding group returned. It consisted of fried pastry parcels (either filled with meat or vegetables) known as “hoosh” with salad (“gatherings”).

This afternoon, we went on a “training” ride for around 2.5 hours. I was a bit nervous to start with, and suddenly it was borne upon me what a big deal this is. Horse riding for 14 days! (OMG) Riding here is a bit different. The command for go is “chu” and the command for stop is “osh”. The horses are quite small and hardy, with a really smooth trot.

We rode in a loop out from the Stepperiders camp, stopping halfway for a visit to a neighbouring ger, where we tried fermented mare’s milk (“airag”). It’s only just become available as they start to wean the foals. I’m not sure I like it too much; it’s like a mix of yogurt and beer. Not really my thing, but pleased to have tried it. They keep it inside a massive open leather bladder hanging on the inside wall of the ger.

While riding, I tried the Mongolian way of trotting a few times, which involves standing up in the stirrups, instead of rising to the trot. It’s quite fun actually, and by the end of the ride I was feeling much more confident in general.

The sleeping ger we have been allocated is also home to a mother cat and four kittens! They are so cute. The mother cat is still suckling the babies, which seem to live in a pipe under one of the beds. There are five beds in here, but so far Kirstyn and I are the only inhabitants (along with the cats). This is a good thing, because we’ve just spent an hour (and all the available beds) re-packing our bags for tomorrow… 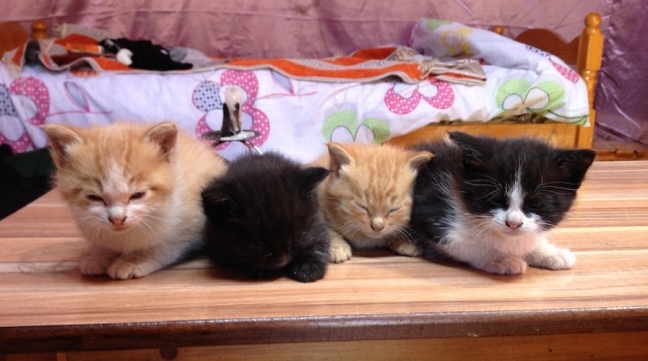 That’s all for now. I’ll try to keep the Mongolia journal posts coming every month or so. To see the earlier posts about the trip (and there were a few) click on the Mongolia tag.