Yes. Pride and Prejudice. With zombies. It’s a thing.

I first tried reading Seth Grahame-Smith’s alternate version of Jane Austen’s Pride and Prejudice a number of years ago. I hated it. With. A. Passion.

Not because I’m a purist — I thought the idea sounded cool — but because I found it clunky. So much of the joy of reading Austen is in the beautiful turn of phrase, which got lost in the adaptation (even though slabs of the original book were retained).

But I thought at the time it would make a great film. And it does.

The movie version of Pride and Prejudice and Zombies is visually stunning and a whole lot of fun. Here’s the trailer:

Oh my, yes it’s that much fun.

I’ve just written a review for Festivale online magazine, which sent me along to a preview screening earlier this week. It’s not posted yet, but here’s a snippet:

Frocks. With weapons strapped beneath them. Dances. Country walks from Longbourne to Meryton and Netherfield – with the occasional zombie slaying. Five Bennett sisters. Blood and brains. And Mr Darcy. That’s what you can expect from Pride and Prejudice and Zombies (directed by Burr Steers), which literally is Pride and Prejudice with the addition of more than a few zombies.

In this alternate take on Jane Austen’s classic novel, England has been suffering a plague of zombies for many decades. However, the Bennett sisters still enjoy going to balls and meeting young gentlemen – which they discuss avidly during morning sparring sessions to practice their Shaolin style zombie-fighting techniques. Lizzie declares a gentleman worth loving and marrying wouldn’t ask her to relinquish her weapons.

There is much to adore about Pride and Prejudice and Zombies. One of the highlights for me was Elizabeth’s response to Mr Darcy’s proposal – a martial arts kick to his chest, with the rest of the famous dialogue played out (not verbatim) to the tune of punches, steel and broken furniture. In this alternate Regency, women have more independence and (as Lizzie says in another adapted famous scene) cannot be expected to be truly accomplished in both the womanly virtues and the art of fighting.

[ed 1 March — My full review is now posted on the Festivale website.] 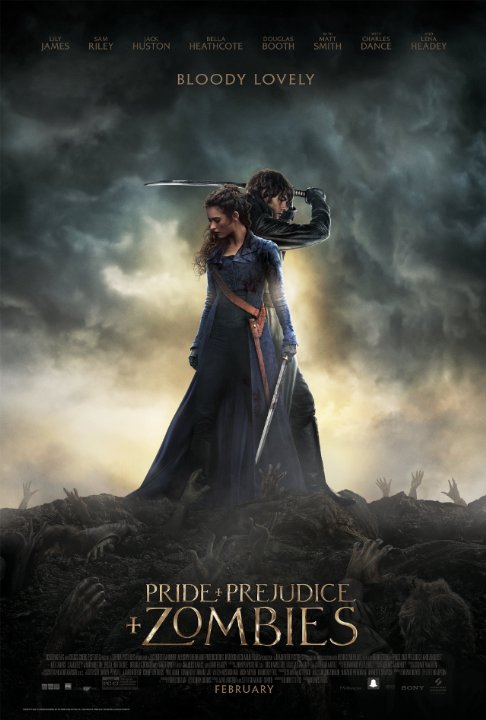 On the whole, Pride and Prejudice and Zombies gets the big thumbs up from me, and I will no doubt be adding the DVD to my Austen collection as soon as it’s available. In the meantime, I might have to go see it in the cinema again…