I started to tell you about Mongolia… and then I got distracted by houses getting demolished and an epic night of D&D. But today we return to the steppes and the horses.

The earlier post (part 1) covered the logistics of the horse trek and how I managed the riding. Today I want to talk about some of the other aspects people keeping asking me about — namely the camping and the food.

One of the most frequent questions I’ve fielded over the past two weeks has been: did we sleep in gers (known elsewhere as yurts)? I guess this is what most tourists do when they head to Mongolia. There are numerous tourist ger camps and there’s this romantic notion that travellers can rock up to a nomadic family and beg some floor space in their home.

We did not sleep in gers — other than the two nights we spent at the Stepperiders camp at the beginning and end of our trek. Those gers were comfortable enough — lino floors covering a concrete base, five basic timber beds in each, brightly painted woodwork… and in one, kittens! (I kid you not. We had mama cat and four kittens sharing our ger. So cute.)

But when we were out on trek, we slept in a tent.

Our campsites were pretty much anywhere — and not necessarily flat! We camped on the side of hills, beside a river, on broad flat valley floors. Sometimes beside roads.

The first thing we would do on being informed “we stop here” (whether for lunch or at day’s end) was furtively assess the availability of trees, bushes, ravines, ridges, secret places where secret business might be conducted. Sometimes our glances would turn into panicked, futile, desperate stares.

Our camp sites were pretty much always beautiful — although some were more so than others. On our second night we camped among a grove of trees nestled at the edge of a grassy saddle between hills. The view was gorgeous and there was lots of ‘cover’. One of my favourite camp sites for sure.

Most of the time, we shared our campsite with an abundance of animals. First, of course, there were our four horses. They’d usually be tied together in pairs, and one would be hobbled. They’d then graze happily wherever they could find grass, roaming indiscriminately into the evening. One night, the horse-sharks chomped so near, we were joking about them falling into our tent. (And they were loud!) Once darkness fell, they were most often staked to keep them under control.

And then there were the goats and sheep and cattle. It became commonplace to watch the little herd beasts drift through the middle of our camp, and we chased inquisitive cows away from our gear on more than one occasion. Or watched them ford the river, right where we were camped.

Most exciting were the herds of free horses.

They’re not wild precisely — they’re all owned by someone — but they’re not domesticated either. Each herd has a stallion with a bunch of mares, most of which had beautiful foals in tow during the time we were there. Any other male horses are geldings.

These herds of free horses are majestic. We loved watching the stallions marshal their herd — call them down to a waterhole, lead them up a grassy slope, round up any stragglers. On more than one occasion we heard them moving very close to our tents after dark, the stallion’s call shattering the silence of the night.

Let me say one thing now: One does not go to Mongolia for the cuisine. I think this is pretty true, although it must be said we were eating Mongolian style camping food, so it was probably even more limited than otherwise.

Our Mongolian camping food was all carbs carbs carbs. Rice, noodles and potato featured heavily. And the same limited combination of vegetables (carrot, sweet potato, capsicum and the occasional tomato and cucumber), with small pieces of mutton with all the lumps of fat left ON. (Beware eating after dark, when the fatty bits are harder to pick out.)

The same few one-pot dishes were recycled over and over for dinner and lunch — mainly a rice-risotto thing and a noodle soup. Twice we were blessed with a dish we dubbed The Delicious Thing — a national noodle dish known as Tsuiwan, a little like pad thai in texture. Wish we’d scored that more often. (Unfortunately not pictured) 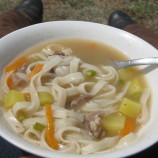 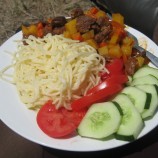 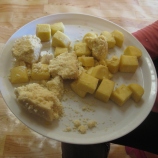 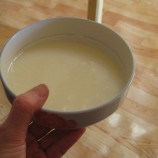 We did not drink any yaks’ milk — Mongolia has plenty of cows to provide milk. We did, however, try fermented mare’s milk, known in Mongolia as airag. This is a mildly alcoholic drink that tastes across between beer and yoghurt. An acquired taste — I could only take a few sips, but the Mongolians drink it by the bowl-full.

And then there’s the curd they make out of cow’s milk. It’s everywhere. A delicacy. It’s the first thing you’re offered when you visit a ger, and it tastes like a brick. Blurgh.

And the coffee? (I hear you ask)

While on trek, we subsisted on Robert Tims coffee bags, which we took from home. I just couldn’t risk the chance there would be no coffee at all. No coffee = bad.

The ‘food’ I missed most? Red wine without a doubt. There were a few evenings, sitting in the sun by our tent, when I would have loved a bottle of red and some cheese on crackers to accompany us through the long evening.

In fact, the catering department didn’t extend to nibbles or dessert of any kind. Breakfast was typically stale bread with jam or a nutella-like spread. It was all very basic. With that and all the exercise, it’s no wonder we lost weight.

There will be more from Mongolia in another week or so. Definitely.

In the meantime, bayarlalaa (thank you) for reading.