Here’s something I don’t do much anymore. Not since I became addicted to downloading ebooks to my kindle. But it turns out I do still sometimes purchase treebooks…

In such cases, out comes my good old (enormous) roll of ‘contact’. 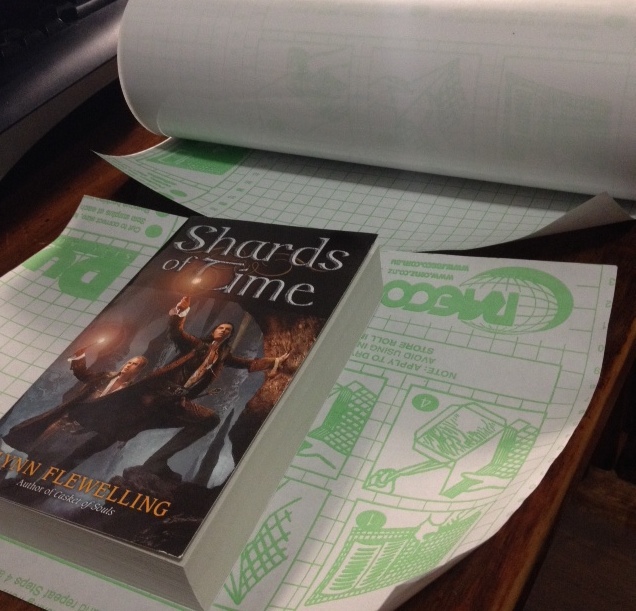 I’ve been covering my fantasy paperbacks in transparent ‘contact’ (also known as sticky-backed plastic) for a very long time — like, almost 30 years. It’s got to the point where I can’t start reading certain paperbacks until I’ve covered them. And it’s not as though I really care whether the covers get a bit dog-eared… but somehow I just like the smooth shiny texture of them covered. They feel more robust. Good for lending to people.

Many years ago a friend alerted me to a particular local company (Duraseal) from which I could purchase wholesale rolls of clear plastic adhesive 30cm wide and a whopping 30m long. A width of 30cm just happens to be perfect for a conventional paperback spread open. A length of 30m makes the roll last a very long time.

And in the age of the kindle? A VERY long time.

The roll of contact shown in the picture was purchased at least five years ago. Probably longer ago than that. And it barely looks as though I’ve made a dent.

I had to buy Shards of Time as a paperback, because it wasn’t available on kindle for some weird reason. I was so frustrated at the time, because I’ve become accustomed to getting books I want in under a minute. But, in hindsight, I’m glad I was forced to get the paperback, because this is about the seventh in the series, and I have the rest in paperback as well.

It’s not as important to me as it used to be to have matching sets of books, but it’s still kind of nice.

There are still some books I’ll try to get in paperback rather than digital, but it’s becoming increasingly rare. I have a feeling that good old roll of contact is going to last decades.

Anyone else like to cover their books in clear plastic adhesive?

11 thoughts on “An old habit, and possibly a weird one”