Last week, that is. Or, rather, the last three weeks.

We were invaded again by a dog. (Buddy — Smelly, yappy, panting thing.) And this time he was not content with stealing my food… this time he STOLE MY BED!

Just because I get to sleep in Ellen’s bed whenever I want… all warm and snug and cozy where he is not… It’s my privilege, you know? I’ve been here much longer than him.

So Buddy realises I’m not in my usual day bed, my cushion in front of the window. And he decides that if I get to sleep in the human bed, then he’ll have MY bed!

He slept there all night. Yeah, okay, he didn’t actually sleep on my cushion, which would have made it stink, but that was only because Ellen took it away. (You’d think she’d have more control over a mere puppy, wouldn’t you? Sheesh.)

It’s been the longest three weeks of my life. Way worse than when Ellen goes away and leaves me here all alone.

Three weeks of beady eyes watching every move I make, his big fat head popping up over the edge of my cushion to stare at me — even though he’s not supposed to. Getting yelled at doesn’t seem to make any difference.

Three weeks of getting chased around the house. Three weeks of having to creep out after midnight to eat, so I don’t have to suffer the little monster watching me.

Three weeks of Ellen paying more attention to him than me. (She takes him for walks twice a day, and picks up his poo, and cuddles him all evening on the couch…) That dog completely takes over.

He made a total mess of the garden, ripped sheets off the line, broke Ellen’s spectacles into pieces… and still she seems to like him.

She ought to be thankful I’m so much better behaved AND I completely look after myself. I’m so much less work. And she calls ME the devilcat. Hurrumph. 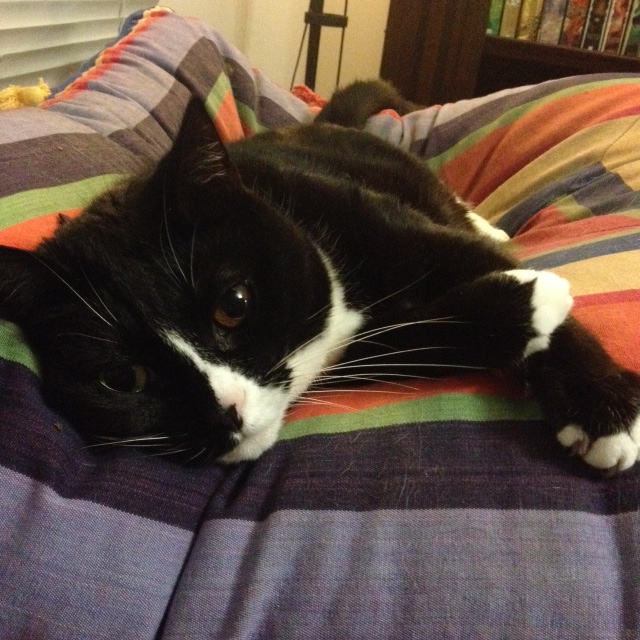 Well, now — thanks to all the catgods — he’s finally gone. And everything is back to normal.

I did get a few good swipes in, though.

15 thoughts on “Diary of a Devilcat: One Buddy I do NOT want in my bed”