Many walkers might have sat in the pub for an extra day instead of braving the SW Coast Path in the rain… Or caught the bus instead. But they would have missed out on a unique experience (that might have put my travelling companion off hiking for ever…).

Having delayed our plans for a day already, we were keen to walk the SW Coast Path from Westward Ho! to Clovelly, even though it was raining. We knew we would get wet and bedraggled and possibly miserable; but it wasn’t too cold (~16 deg C) and we were feeling energetic and adventurous. Also, I figured it would be good research for us, both fantasy writers, to experience the whole ‘trek in the rain’ thing.

So off we went. The first half of this 18km trek took us over the cliff tops — and up and down them as well. It was strenuous as expected, but beautiful too. I loved it. 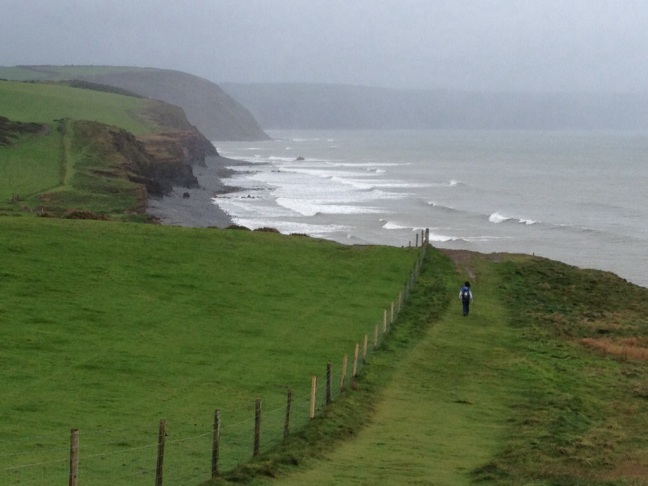 But we did get very wet. And muddy. This is me about an hour in… 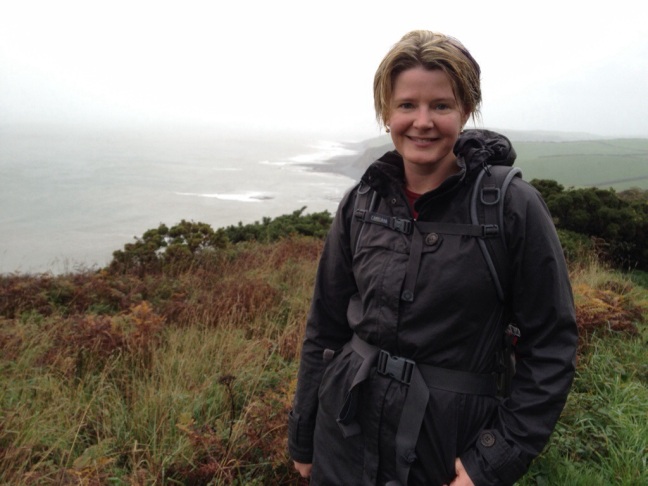 The path is very well marked with signs bearing the SW Coast Path acorn symbol, or else a simple acorn and accompanying arrow attached to a post.

After a couple of hours of up and down (into a fierce headwind of rain — rain in the face is so much fun… and our glasses fogged up), the track moves into woodland, which spoilt the view, but did provide a measure of protection from the weather.

Eventually, slightly more than halfway I think, we arrived at the ‘village’ of Bucks Mills. Though cute, Bucks Mills was very disappointing from an amenities point of view. No refreshments at this time of year, not even a pub/inn. We were really hoping for somewhere out of the weather, where we could sit down and have a hot cup of something (hot toddy?). There was not even a toilet. Pft!

Following Bucks Mills the track got easier through more woodland, still up and down, and less slippery and steep. We still had a few hours to go, though. We skirted meadow and woodland (chasing flocks of pheasants — beautiful birds), until we came out to Hobby Drive, the old coach road, which wound around the last few spurs, eventually (after about 45 mins of weary trudging) bringing us to the top of Clovelly village.

We still had a 15min trek to our B&B in Higher Clovelly [Tip: Stay in the village if you can — there are only about three options though], and by the time we reached it we were beat. We hadn’t sat down all day. But there is nowhere to eat in Higher Clovelly, so our kind hosts at Fuchia Cottage drove us down again to the top of the village, a little later on.

After that effort, we decided not to trek further along the Coast Path, so instead spent today relaxing in the picturesque village of Clovelly. It has been privately owned for centuries (weird) and is very geared towards tourists. It’s quiet this time of year, which is nice. We made friends with several of the local cats, who are very friendly and like to pose for photographs. This is ‘Beau’, who followed us around for a while.

Down at the water’s edge, we watched some local fishermen (who I’m convinced are hired as a tourist attraction, because they spent a lot of time explaining what they’re doing and posing for photos) gut ‘fish’ (sharks for the Spanish market), and gained a gorgeous view of the village from the old stone quay. 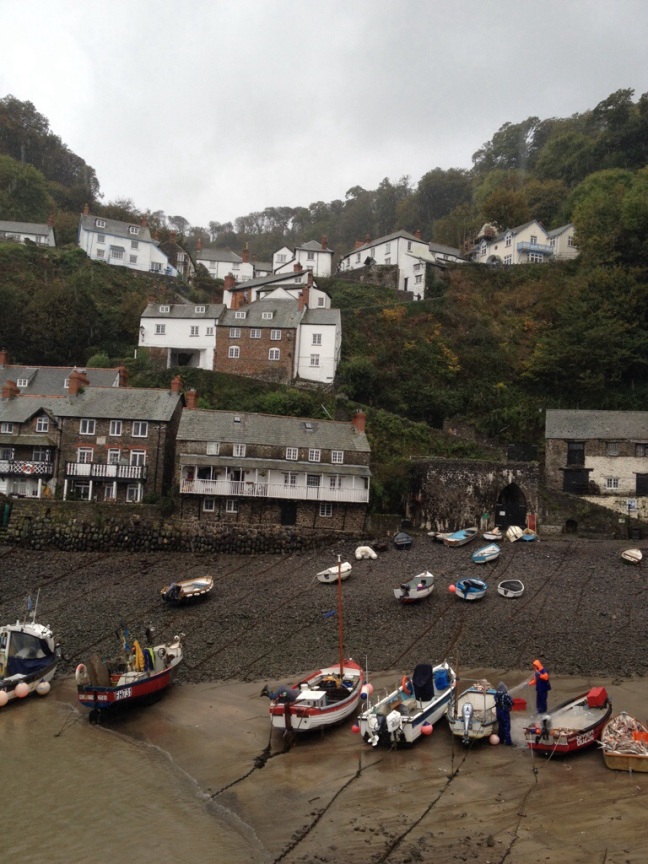 It’s been a relaxing day after two days of walking. I think we both needed it! The weather has once again been rather grey and rainy, but we did glimpse the sun a few times. I think perhaps autumn is starting to set in…