I’ve been sorting through old storage boxes today, and I came across my first ever travel journal — it’s illustrated and everything. I was 12 years old, and our family was going on a camping road trip to South Australia’s Flinders Ranges in our brand new 8-seater Mitsubishi van…

Sunday 15 August — Spent about an hour packing but at last we are on the road. We left the house at 9:53 and we stopped at a petrol station. When we left home the gauge was 1910km. Stopped at Ballarat for lunch two hours after we had left. We walked a little way and saw many birds. Arrived at camping ground at 3:25. We got a caravan with two bunks. We went to Little Desert for about an hour and I saw the first kangaroo hopping into the scrub. The camping ground was at Dimboola. S, M and I found a little cubby looking onto the river and we went there with torches to show daddy. It was my turn to dry the dishes tonight. 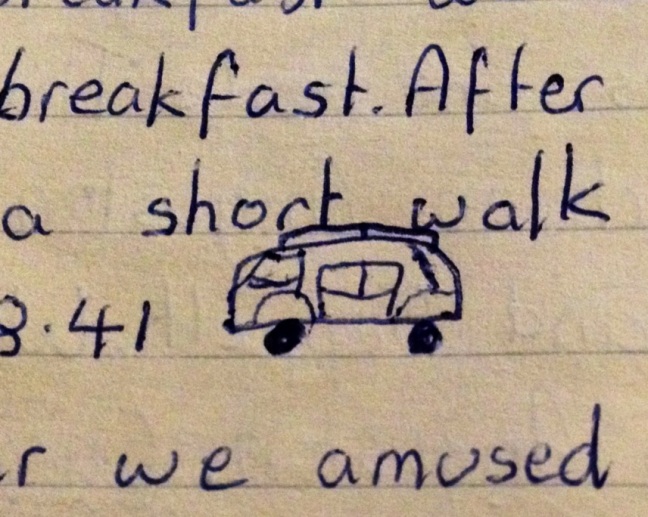 Monday 16 August — Before breakfast we went for an interesting walk. Then we had breakfast. After breakfast we packed, then we all went for a short walk before we went. We left Dimboola at 8:41. [ed: hahahaha] In the car we amused ourselves by giving each other squiggles but I got sick of that. We stopped to look at some funny looking melons in a sheep paddock. S and M got one; we smashed it open with a rock, it was awful. Another interesting thing was that we found hundreds of shells, some with animals in them! So our melon stop turned out to be a shell stop! We were miles away from the sea.

We had lunch at Menigie on the Prince Albert Lake. Then we looked at the Coorong, then we crossed the joining point between Lake Alexandrina and the Prince Albert Lake. We stopped at the Murray Bridge Cheese factory where we were shown around the factory. We had to wear funny hats and when we were finished we got lots of stickers and project things and we bought some cheese. At last we have arrived in Adelaide.

Thursday 19 August — We left [Adelaide] at 9:16. We stopped at a salt co. and dad took a bit of film. (The map nearly flew away.) Daddy went to ask at the office and we got some salt off the salt pile. We had lunch in Snowtown and we bought some lovely country bread, it was so nice mum bought some more for breakfast. Although it is winter, the day is lovely, just like spring and the town was dusty and dry. We stopped at Port Pirie where the main road was Ellen St. Mummy took a photo of me standing under a sign. We went to the museum which was really interesting. We have arrived at this camping ground in Quorn and we had a camp fire, and sausages and bread for tea.

Friday 20 August — We left the camping ground at 9:22 after a cold morning and a hot breakfast around the camp fire. We stopped to get some bread and mum went round to a Mother’s stall and bought some caramels and other sweets. We left Quorn at 9:35. We went to Warren Gorge and us girls climbed up one side. Then we went to Bukaringa Gorge and saw a dead kangaroo (Yuk!). Then we stopped to look at a windmill and for dad to change his socks [ed: ??!!] and we went fossil looking (we didn’t find any) and M got ant bites on her hand.

We stopped for lunch at one point where the creek met the road and we had a paddle as it is very hot. Then we stopped at an old ruin to look at it and saw a stumpy tailed lizard and a littler lizard. We stopped at the ruins of Kanyaka, an old town and there was one, if it had a roof, that would have been good enough to sleep in.

On the way to Hawker we saw 26 dead kangaroos, including the one I said before. We stopped at Hawker for a few minutes to get petrol. From Hawker we saw 18 dead kangaroos and that makes 44 all together. We arrived at the camping ground where we are going to stay for 9 nights at 3:00 and I let the grasshopper, which had travelled with us from Hawker, go. (he was quite a cutie.) We had tea around the open fire. S was bitten by the caretaker’s dog.

And so it goes on for 3 weeks. I find it very amusing to read now (and the illustrations are priceless), but won’t bore you with the rest of it. We became quite fixated with counting dead kangaroos, as I recall. (Mostly lying at the edge of the road after being hit by traffic.)

As it happens, this was the same trip from which I shared last week’s campfire memory — only (according to my newly discovered journal) it turns out it was Fellowship of the Ring we were listening to around the camp fire. The Hobbit must have come earlier. Not long after this, I wrestled LOTR off my father and read the rest for myself.

Today’s post is a response to this week’s wanafriday theme (yes, I know it’s Saturday — oops), which was to ‘write about a long drive you took’. Here are some of the other responses:

Did anyone else keep a travel diary at aged 12? I must admit I had completely forgotten about this one! What’s the most memorable road trip or family holiday you ever took?