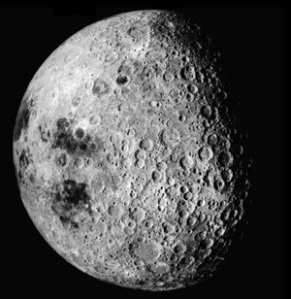 How would you react if you suddenly found yourself stranded on the moon?

I jotted this question down recently as I watched a Dr Who episode — you know the one where Martha is introduced? The episode is called Smith and Jones.

Anyway, Martha is a student doctor working in a London hospital that is suddenly transported wholus bolus to the moon by aliens. (Typical for Dr Who, really.) All the patients, staff and visitors are transported with it, the windows revealing the barren lunar landscape that nevertheless seems to have earth-like gravity. (We’ll ignore this tiny factor and attribute it to the forcefield that provides the air.)

Upon realising they’ve been transported to the moon, most of the humans run around the hospital waving their arms in the air, screaming at the top of their lungs.

Is this how you would react? No? I didn’t think so.

I’m not saying I’d be a hero like Martha and help The Doctor save the day, but I do think I’d take the time to look out the window and MARVEL. I mean, this is the MOON.

In this particular case I think Dr Who lets itself down with such a cliched schlok horror moment of B-Grade hysteria. But it did get me wondering how people would react in such a situation — and the conclusion I swiftly reached is that everyone would react differently.

In fact, the spectrum of reactions that such a crowd would likely produce would in itself have made a fascinating story. Had there been no Doctor, who would have stepped up and worked with others towards a solution? Who would have lashed out with blame? Caused violence and spread doubt? Who would have slipped into nurturing mode?

The possible scenarios for how the situation could have panned out are virtually endless.

I suppose we never truly know how we ourselves will react in moments of extreme surprise/fear/pain until we are put into the situation. Moreover, our initial reaction will probably be unrelated to how we deal with the situation long-term.

For example: I might be confident that I’d stare out at the lunar landscape in wonder initially (there would NOT be screaming!); but, ten minutes later, confronted by hostile-appearing aliens with big guns? I couldn’t tell you.

We like to imagine we’d be strong and level-headed and helpful to others . . . but there’s a good chance you’d find me in one of the hospital wards hiding under a bed.

What about you? How would you react? Would you like to find out?

19 thoughts on “If you found yourself on the moon…”