I’m pretty excited about this latest mixadventures post, because I feel as though I’ve stretched myself a bit. Not in terms of difficulty (not at all — all these dishes are soooo easy). But most of these “new” dishes I would never have attempted (or bothered with) in the past.

In short, I feel as though I am really making progress in my mission to cook more food from base ingredients.

I’ve had a lot more head space (and time and energy) for cooking in the past month (since a large work project came to an end). I’m still doing my experimenting mostly on weekends, because I invariably need to shop for ingredients. But I am slowly expanding my pantry stores and getting a feel for what I need to buy regularly.

And, just to reiterate, I’m still sticking to simple projects — because I’ll never be someone who wants to spend days (or even hours) in the kitchen on a regular basis. And I’m still only cooking for one. But I’m getting such a thrill from producing delicious homemade food when I need to take a meal or a cake somewhere, and enjoying the meals I cook for myself as well.

Here is all the new stuff I’ve produced since the previous post.

I’ve become a fan of cooking custard in the Thermomix. Using the automated setting, it’s basically a case of throwing in ingredients and pressing go. It takes just 8 minutes to cook a thick, creamy custard… for chocolate custard you just add cocoa. 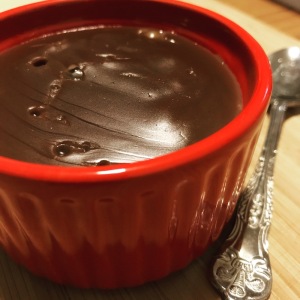 Chocolate custard is an awesome option for those nights when you just need a quick chocolate pudding (and you can’t be bothered getting too elaborate). I mean… 8 minutes is all it takes! (Yeah, OK, you still need to wash up, but you can do that later…)

Confession: This isn’t actually the first time I’ve made chocolate custard. It was, in fact, the third thing I ever made in my Thermomix. But it’s so good it’s worth repeating.

I grew up with homemade tomato sauce, but never had any desire to make my own until recently. My mother often makes sausage rolls for family gatherings (the kids, ahem, love them) and now she’s started making sauce again to go with them. I took a look at the recipe in the Thermomix basic cookbook and it looked easy enough, so I began obsessing over needing to make it too. Maybe I got inspired by my successful foray into beetroot relish.

Anyway, I asked my mother to look out for cheap bags of tomatoes. The stars aligned and the tomatoes came when I had a free weekend. A few hours later I had homemade ketchup! Oddly enough, I don’t actually eat tomato sauce all that often, so I don’t know why I was so intent on making it. Nonetheless, it was yummy with (bought) sausage rolls.

Told you I was keeping to simple things — and it doesn’t get much simpler than this! Since I work from home, I’m often looking for something nutritious, quick and tasty for lunch. (OK, confession: I’m trying to get into the habit of eating more often at home and not in cafes all the time…) I sometimes cook eggs (poached or scrambled) … then one day a couple of weeks ago I decided to test out the Thermomix method for boiled eggs.

Basically, you throw (er, place) the eggs into the simmering basket and heat/boil/steam them for a time (depending on size of eggs and how hard you want them). Apparently you can easily do 12 eggs at once in the simmering basket (rather just the four), and twice as many again if you put them in the steamer/Varoma. 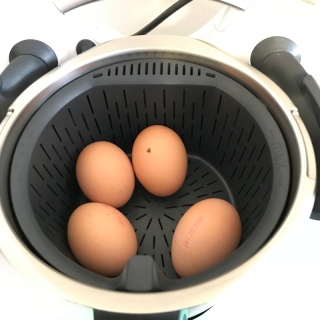 Although it’s undoubtedly more energy-intensive to cook eggs in the Thermomix, compared with the gas stove top, there are two distinct advantages: 1) I was able to disappear back to my computer for the 13 minutes of heating and cooking, and 2) there was no washing up whatsoever.

Pictured above is a delicious combination of soft boiled eggs with avocado on (bought) toast. Absolutely divine. Today I cooked more eggs and ate them with a smear of avocado on two of my latest batch of potato/vegetable cakes. Noms!

One recent weekend I had three social engagements requiring me to contribute food. My D&D crew got soup for dinner, my mum got the torta caprese as a birthday cake… which left me wondering what to make for the third event. I was meeting a group of women for afternoon tea. Half of them are gluten-free and I’ve made the torta caprese for them before. But this time I wanted to make something new.

I thought, being afternoon tea with many things to choose from, a slice would be ideal. So I hit the Thermomix recipe community, which I’ve found very useful for things like this. In the end, I found this healthy nut slice, which turned out to be pretty amazing. It’s simply nuts, seeds, dates, maple syrup and macadamia oil — blitzed and then baked for 20 minutes. It’s delicious and healthy as well. So good!

I was so excited to try this recipe. I got it from a cooking class I attended last week (more on that in a moment). I’ve never poached chicken before — never even considered it — but this recipe looked super easy and tasty. I often wish I had some cooked chicken on-hand to use in meals. Sometimes I buy a cooked BBQ chicken for this purpose, but making it myself has got to be better.

Again, it’s really simple in the Thermomix. I used rosemary and sage as my herbs (with onion and garlic), and chicken breasts because I couldn’t get hold of thighs. The chicken was cut into chunks and placed in the simmering basket, immersed in the broth. It only took about 20 minutes cooking time in total. And, oh my goodness, did it smell amazing!

Then, when the chicken is cooked, you strain and retain the stock for use in other dishes. I immediately made a vegetable soup using about half the chicken stock, instead of the usual vegetable stock. I served the soup with toast and some chunks of the chicken thrown in for protein. Yummy dinner. I think I’ll use the rest of the stock (now in the freezer) in a risotto… or maybe a pasta sauce.

I think I’ll be poaching chicken fairly regularly. Squee. But I suspect I’ll end up with more liquid chicken stock than I know what do with. My freezer is only so big…

As mentioned, I attended a cooking class last week. This was focused on using the steaming function of the Thermomix, known as the Varoma. Although I have used the Varoma before, it was fabulous to gain new ideas and recipes. In the class, they made a range of different foods, including a chicken tikka curry, a souffle omelet and steamed date/toffee puddings (all yum). I am particularly looking forward to attempting the steamed pork buns!

As usual, there are a number of recipes I’m making regularly — especially soups and the flourless almond chocolate cake, torta caprese. I’ve also made second batches of bread and potato/vegetable cakes. My second bread attempt was much better than the first, since I used the right flour. Below is just one of my recent soups (left) and my second homemade bread attempt (right) as toast.

And that’s all for this update… If you’ve made it this far, thanks for sticking with me through quite a long post. Not sure what’s next, but it’s bound to be yummy!

2 thoughts on “Mixadventures with poached chicken and other stuff”