I haven’t climbed out of the tent yet. I hear snoring from the next tent, the ripple of the river, horses munching, birds chirping, the groan of some distant animal, grasshoppers chirruping and smacking the side of our tent.

We’ve spent most of the day at the Genghis Khan Monument. Being the halfway point of the trek, today was designated a ‘rest day’ for humans and horses — boy did we need it!
We all rode to the monument, then Ganaa (our horsewoman) took the horses to the next campsite and David returned at the end of the day with the car to collect us.

The ride to the monument took under an hour, and involved climbing an enormous hill to give us an aerial view of the monument before we got there. I felt a bit sorry for the horses, but mine was a champion and powered up the hill. He just put his head down and went for it in a solid walk. The view out over the valley floor was impressive.

The monument is a 40-foot statue in shimmering stainless steel of Genghis Khan mounted on a horse, all on top of a building housing two museums of Mongolian artefacts.

We spent the whole afternoon at the monument. First we checked out the two museums, which were fabulous. The first exhibition was of Bronze-age artefacts between 4th C BC and 1st C AD. Notable items included bronze daggers, buckles, belts, miniature figurines, bowls, stirrups, mirrors… many/most featured intricate designs of horses (sometimes being attacked by tigers), birds and many other animals. They appeared to be finely cast and impressively intricate. Really beautiful, and indicative of how (wealthy) people even back then liked having pretty things.

The second exhibition was of artefacts from 13th-14th C — the time of the great Mongolian empire. Cool stuff in here too! Items of note included swords, bowls, vessels for wine, gorgeous little stoves for sitting over fires, copper concave mirrors for fire-lighting, mail made of small forged plates stitched onto leather, chain link mail, cast steel stirrups and bits…

After the museums, we ate lunch in the restaurant. We pounced on the menu, keen for anything other than what we’d been eating, albeit with some measure of trepidation. We both ordered “chicken cutlets”, which proved to be some kind of chicken meatloaf with potato wedges and salad. It was yummier than it sounds — although we were probably fairly easy to please after all the stodgy camping fare.

Next we took the lift up inside the statue and climbed out to stand on the horse’s head, from which you get a 360-degree view of the surrounding valley. Apparently the statue was erected on the site where Genghis allegedly found a golden whip, a massive replica of which is held in the statue’s hand.

There’s not much else to do at the monument, other than view a short video about the building of it, which was certainly fascinating from an engineering perspective. The grounds around the outside are completely undeveloped and badly maintained. Like so much of this country it feels as though something was built with huge aspirations then left to fall into ruin and decay. One decided bonus, however, was the flushing toilet in the tourist centre!

We’re currently in our latest campsite — another valley amid the hills of the steppes. It’s another gorgeous location, despite the high-voltage power lines we’re camped below. It’s sunny like it hasn’t been all day, and I have no idea of the time. 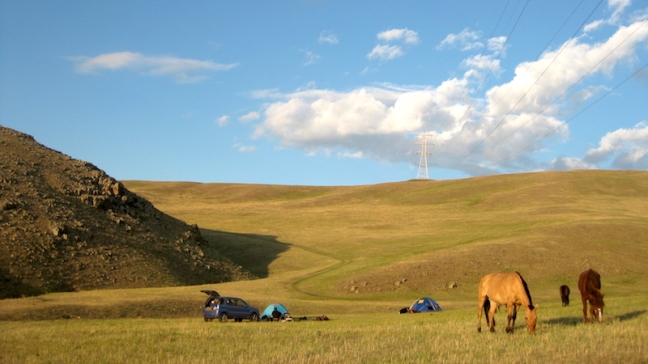