After a short break from travel posts, here’s another from my recent trip. Today I want to tell you all about Exeter, the historical administrative capital of  Devon which I took a particular shine to.

Exeter is a city with a strong connection to the past. Its position on the River Exe made it a prosperous river port as far back — perhaps even further — as the Romans. Later it rose to prominence on the back of the medieval woollen cloth trade. Then it got itself a spectacular cathedral and now it’s a university town.

As a result it is one of those ancient cities with so many layers it’s like peeling back the layers of an onion. And nowhere is this more obvious than in the old city wall. Originally built by the Romans, it was later added to and expanded by the Saxons and then the Normans. This section of wall shows evidence of the different types of stone used during the different eras… 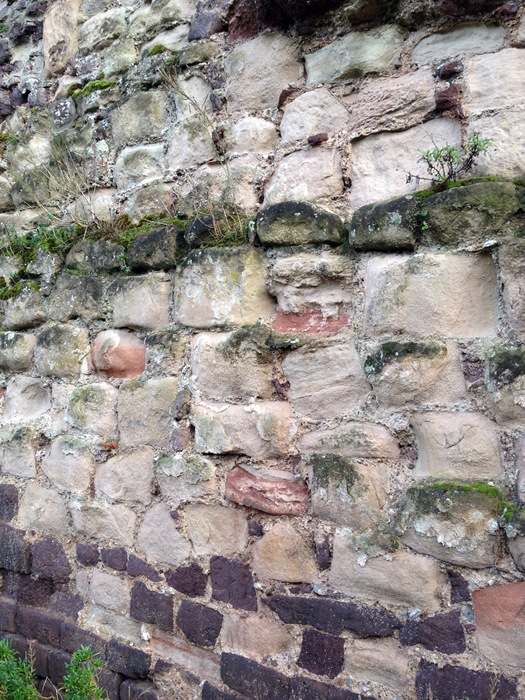 We did the ‘wall walk’ on our first afternoon in Exeter. We grabbed the map from the tourist office and followed it all through the streets of the city. It was a fabulous way to orient ourselves — strolling about a city is my favourite thing to do, particularly if there’s a self-guided tour to give me a focus and some information.

The following day we joined a free two-hour ‘red coat’ walking tour around ‘medieval Exeter’. This focused on the history of the woollen cloth trade, and ranged from the ancient Stepcote Street (one of the original main roads into the city), the guildhall, the old Medieval Exe Bridge, and down to the old Quayside area. The tour also took in several old houses and the magnificent Exeter Cathedral (which we went back to later in the day to see inside).

On top of actually producing the wool from the surrounding farms, Exeter was known for weaving the cloth (a cottage industry) and was also the central point in the region for ‘finishing’ the woollen cloth (including serge), supplied from towns all around. This process evidently required urine in significant quantities. Villagers used to collect the family urine in a pot so they could sell it — leading to the origin of the phrase “too poor for a pot to pee in”. Heh.

Another expression — to be on “tenter hooks” — is derived from the hooks upon which the woven and finished cloth was hung to stretch and dry. The longer the cloth, the more it could be sold for.

As if all that history wasn’t enough for us, Exeter has a wonderful modern cosmopolitan vibe as well. We found a cool clothes shop, where we spent a happy half hour trying stuff on (I bought a skirt), some craft shops in the old port area (we bought jewelry), and a great coffee shop as well — the Exploding Bakery. I found this place (not quite a cafe, more a wholesale bakery) en route to and from our hotel. It just looked like my kind of coffee shop. And so it proved, having the first ‘flat whites’ I came across in the UK. (Although not, alas, much of a menu, other than cake! Not necessarily a problem…)

It’s funny actually. Whenever we did find a place with our definition of good coffee, and then revealed we came from Australia, they looked interested. But when we revealed we came from Melbourne, the barista would invariably look nervous and claim to feel under pressure. We just said we were grateful for good coffee! (For the uninitiated, the Costa Coffee and other franchises seem to have taken over in the UK. And they’re not pretty. My tip is to search out the independents. Especially the ones with Australian baristas! Trip Advisor proved a help in this regard.)

So that was Exeter. My kind of city. I could definitely live there quite happily I think.

What do you like to discover about a city when you travel? What’s your strategy for revealing a city’s soul?

8 thoughts on “The many things I like about Exeter”