Phillip Island in winter is quiet, serene, beautiful. With the blessing of a clear weekend, I hightailed down to the island this past weekend for some much-needed R&R and time alone with my WIP. It turned out to be one of the most relaxing and joyous weekends I’ve ever spent down there.

One of the lovely things about my current self-employment status is the flexibility. So I headed down on Thursday night and spent Friday morning working from the island, tethered to my phone. (Gotta love modern technology.) Somehow even working down at the island seemed relaxing.

After that, the rest of Friday and the weekend was mine to do with as I wished. I hung out in the cafe for brunch with the WIP (Rumbles Cafe and Bar), kept the fire roaring, and maintained a steady intake of coffee, wine and chocolate. And some healthy food as well.

On Saturday morning I revisited the wreck of the SS Speke (1906). As I mentioned in a recent photo challenge post (Relic), I first visited the Speke years ago and I hadn’t been back — but WHY? I’m now asking myself. The rusting fragments of hull are washed up on the rocks in a fairly secluded cove… at this time of year, I did not see one soul as I trekked over the headland, down onto the beach and clambered all over the wreck. 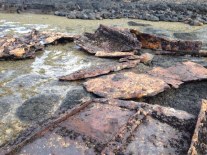 Then I wandered along the deserted beach to the next cove, all pristine sand and crystal blue water, and saw nary a soul there either.

Writing-wise, I got a fair bit done — although I also managed some downtime as well. I think I tend to get a bit obsessed with being ‘productive’ all the time, needing to feel as though I’m making every hour count for something.

Yet it’s good sometimes to do nothing at all. On Saturday afternoon I let two hours slide by, and I have no idea at all what I was doing. Just sitting on the couch. Mulling. Dreaming. Relaxing.

It really was such a lovely weekend.

In other events of the past couple of weeks, I took my niece and nephew to see he movie How to train your dragon 2, which was a lot of fun. I really like some of the incidental dialogue in those movies — in this one, there’s a lovely scene between Hiccup and Astrid near the beginning, which illustrates their relationship brilliantly.

Another small thing that stood out for me was the way they deal with Hiccup’s — the hero — prosthetic foot. It’s not over-dramatised; it simply is. A great acknowledgement of disability and diversity.

And the animation of Toothless, Hiccup’s dragon. He is so adorable and totally the star of the show. Really reminds me of my devilcat.

I was intending to write a full post about the movie, it being fantasy and all, but it doesn’t look I’m going to get to it. Suffice to say I enjoyed it a lot. The story is much bigger and more serious than in the first movie, and I think they did a pretty good job.

4 thoughts on “Sunday journal ~ time out at Phillip Island”